A forearm prosthesis will aim to replace some of the lost function from the missing limb. In general, amputations below the elbow will require simpler devices than those that occur above the elbow. This is because above-the-elbow prostheses require something to act as a substitute for the elbow joint.

The components available for a forearm amputation will be the similar to the above elbow prosthesis. Choosing the type of prosthesis to use will be decided by the patient and a prosthetist. The amputee will be able to choose from either a functional or a cosmetic prosthesis depending on their needs.

Functional prostheses are either a “body-powered” prosthesis or an electric prosthesis. The body-powered prosthesis system allows the user to operate the terminal device by flexing a muscle near the stump of the amputated limb. The energy from this movement is then transferred to the prosthesis by means of a stainless steel cable.

Alternatively, the “electric” prostheses which uses the electric current signals within a muscle contraction (EMG signals) on the residual limb and skin to power the prosthesis to carry out the functions of the wrist or hand. The power is provided by a battery in the prosthesis.

Functional hands are designed to allow different types of terminal devices to be attached. 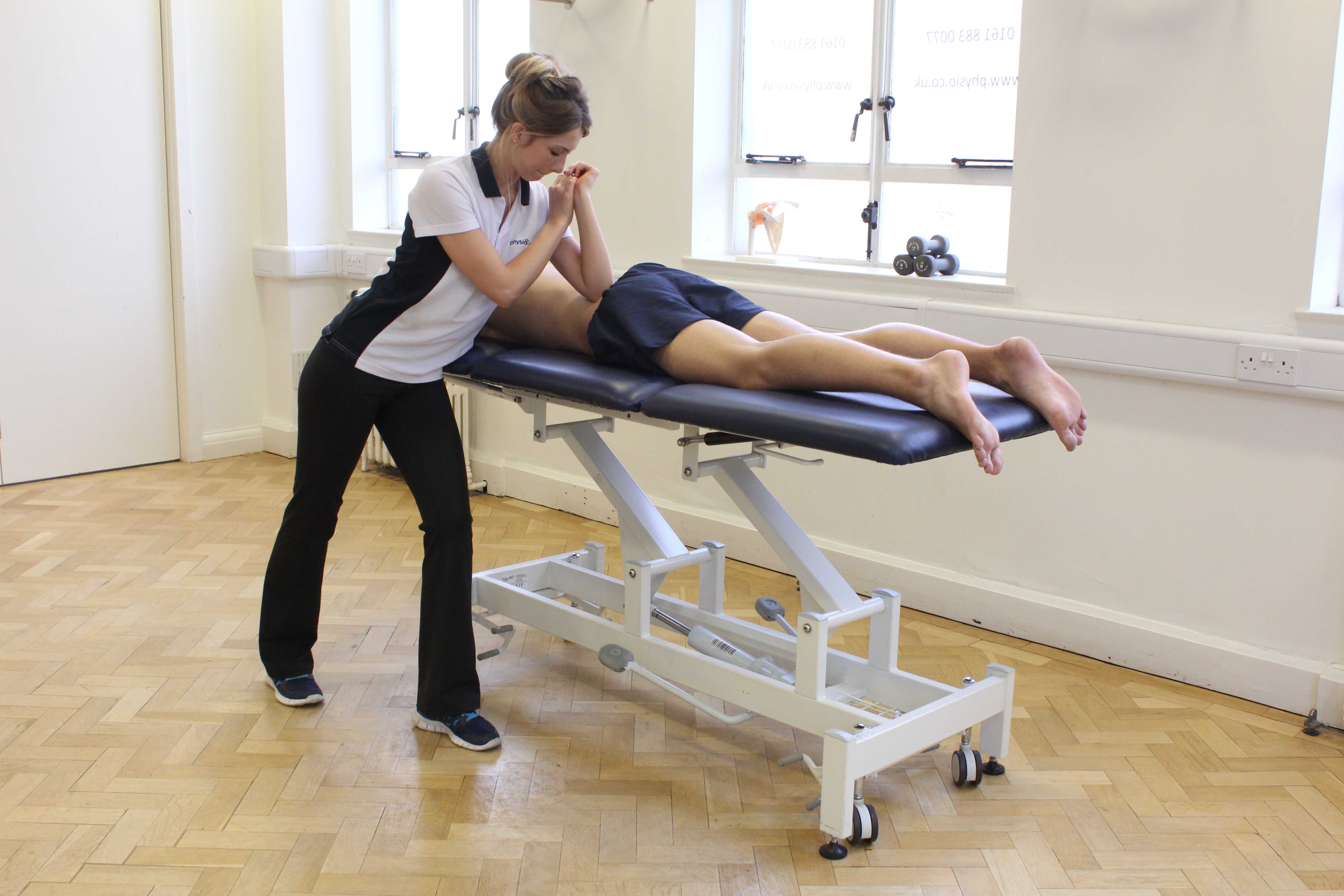 Above: Soft tissue massage of the lower back by a specilaist massage therapist


Components of a Functional Forearm Prosthesis

Harnessed-based systems are a commonly used suspension systems for many arm amputations. With a simple harness, called figure-8, straps go over each shoulder and criss-cross. This suspension system has proven its reliability during lighter duties. The figure-eight pattern is the harness most commonly used in the unilateral below-elbow amputations, with the axilla on the unaffected side being the site of anchor for the motion. The advantages of this system are that it is a simple device that can be easily adjusted. However, discomfort may be caused as the system does bear weight underneath the shoulder. The harness can be altered to a shoulder saddle and chest strap which provides greater lifting abilities and many users find it more comfortable to the standard figure-8 harness. One advantage of the chest strap harness system is that it can provide greater load supporting capability and improved stability.

Self-suspending sockets can be used with or without a harness strap. Their main advantage is the ease of use. However, they do have a limited lifting capacity when compared to the harness system as well as reduced elbow flexion and they are less attractive in appearance.

The fit between the prosthesis and the individual’s body is an important element in ensuring that the prosthesis is comfortable and functional. Most upper limb prostheses have a pliable socket that is custom moulded over the stump to ensure an exact fit.

There are two different designs that can be used for the socket. The first design is a rigid inner socket that is measured and designed to fit the individuals stump. A second layer is designed over this to look like the opposite arm in colour and length. The inner socket provides the function and should be comfortable to wear over long periods of time. The second design has a more flexible inner layer allowing the second layer to provide the support. This enables attachment of various cables and joints as needed to the second layer.

The forearm component will consist of a plastic shell. It is attached to the socket which helps to stabilise it, whilst the wrist unit will be attached to it distally.

The most distal component of an upper-limb prosthesis is termed the terminal device. For amputations through the distal third of the forearm, the amputee retains a limited amount of active supination and pronation. The addition of flexible hinges helps to facilitate the transmission of this residual forearm rotation to the terminal device, thereby minimising the requirement for manual prepositioning by the amputee.

The hand or terminal device may be viewed as the most vital component to the prosthesis as it replaces the arms most important lost function, being able to grasp an object.

Five different types of grips are available with hand or terminal devices. These are as follows:

Whatever type of prosthesis you have, you will benefit from physiotherapy input. If you would like to arrange an assessment with one of our physiotherapist please call Physio.co.uk on 0330 088 7800, you can also book an appointment online.