A ligament is a soft tissue that connects bone to bone. Ligaments help to provide stability to a joint and can limit or prevent certain movements to minimise the risk of injury. There are four main ligaments of the ankle joint: The first three ligaments described are located on the outside of the foot and ankle whereas the deltoid ligament is found on the inside. The deltoid ligament is a lot stronger than the other three and therefore is less commonly injured.

When a ligament is damaged it is known as a sprain. This can be done by twisting the ankle, a fall, a sudden trauma such as a kick to the ankle or it may occur if the ankle is already unstable from a previous injury. The most frequently injured ligament is the ATFL which is considerably weaker than the others. This ligament is damaged when the position of the foot and ankle points forward (plantarflexion) and slightly inwards (inversion). This movement stretches the ATFL ligament and therefore makes it more vulnerable to injury. Symptoms of an ankle sprain include: There are different grades of sprains which depend on how severe the injury is; only serious sprains will require surgery: A grade 1 and 2 ligament sprains are managed with R.I.C.E treatment (rest, ice, compression, elevation) initially. This is followed by electrotherapy techniques such as ultrasound, gentle mobilisation techniques and soft tissue massage when the swelling has subsided. Please see the pages on conservative management of minor ligament tears for more information.

If you have suffered a grade 3 ligament tear, you may initially be advised to try six weeks of conservative treatment before going down the surgery route. However, if this has no effect and you still have considerable pain and joint instability, surgical reconstruction of the ligament will be advised. Usually, the surgery is performed by tightening the damaged ATFL ligament and reattaching it to the bone so it returns to its original strength and shape. If your ligament is too damaged and will not be strong enough to repair a procedure called a tendon graft may be carried out instead. A section of a nearby tendon (often from the peroneus brevis muscle) is used to replace the ligament and then allowed to heal. 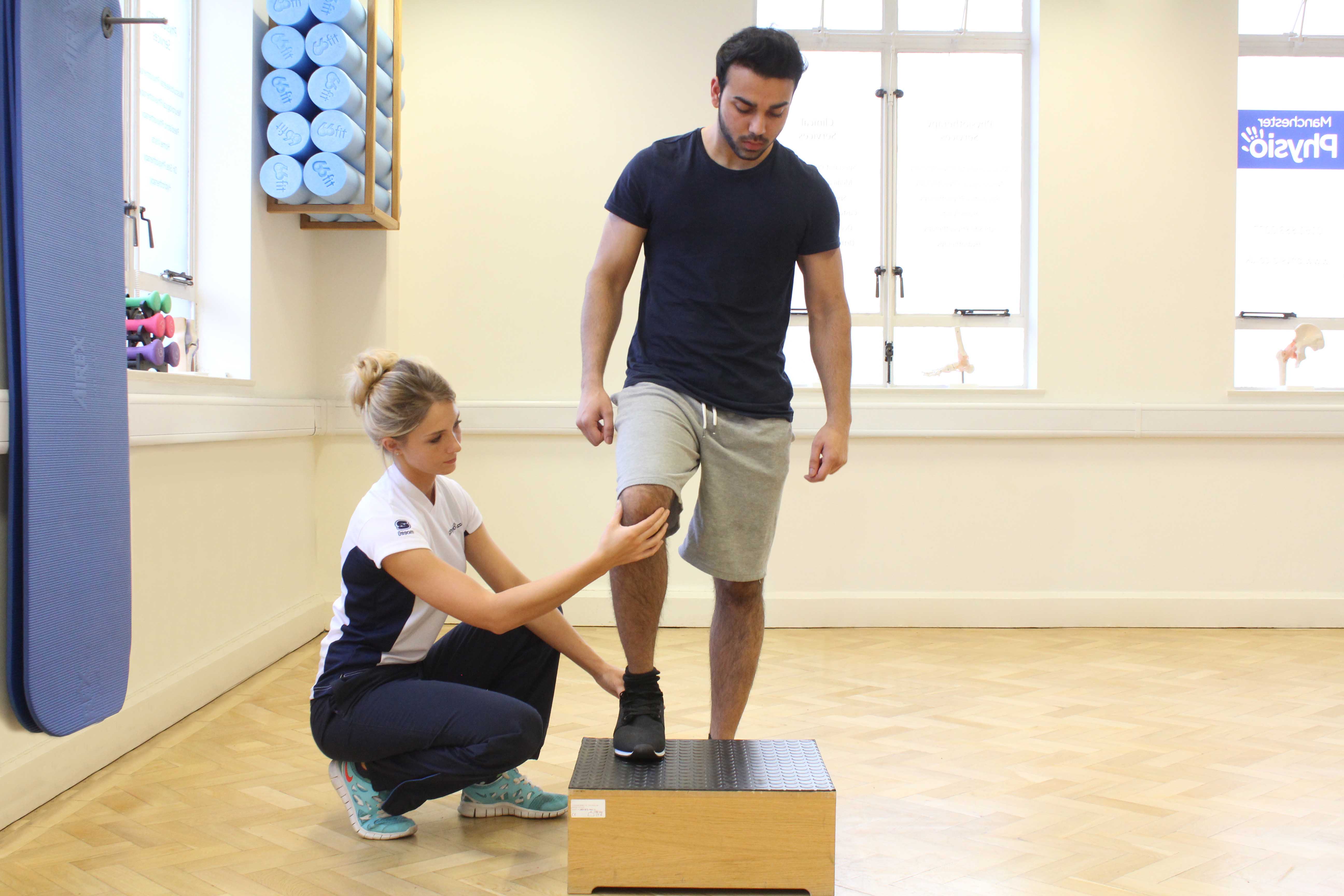 Physiotherapy prior to ligament reconstruction

If you require an ankle ligament reconstruction you may be on a waiting list or be allowed several weeks to see if surgery is the best option for you. During this time it is essential that you maintain you range of movement and strength in your other ankle and facilitate the healing of the injured ankle as best as you can. At Physio.co.uk, our experienced physiotherapists will be able to create you a personalised programme to optimise your rehabilitation outcome and prevent any further complications with your injured ankle. During this stage rehabilitation will focus on: 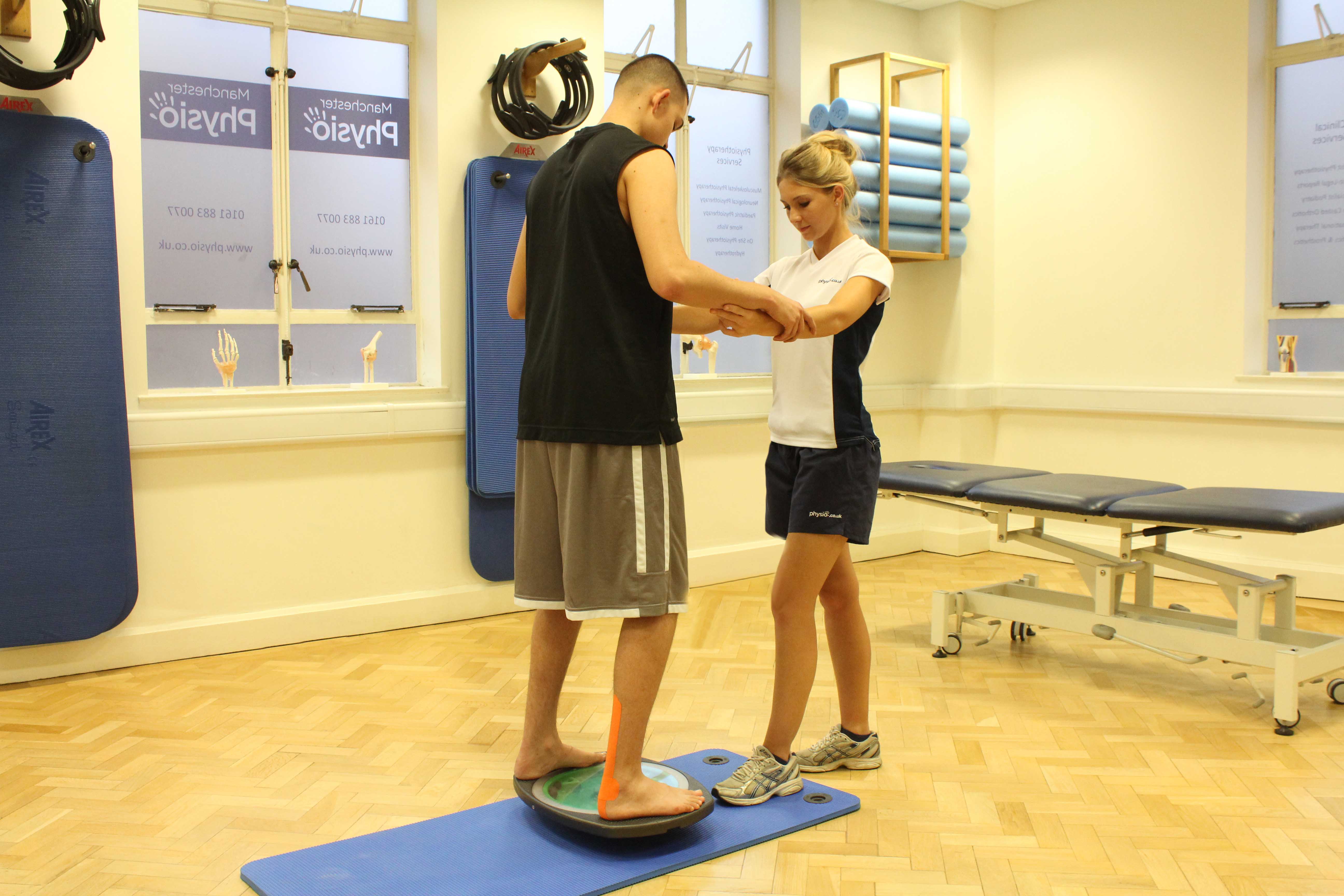 Above: Taping the ankle to improve stability during balance exercises

Following reconstruction surgery you will be given an aircast boot to wear for three weeks. This allows some movement of the foot and ankle and you will be able to gently weight bear immediately after the operation. Following the surgery you may experience various symptoms including: 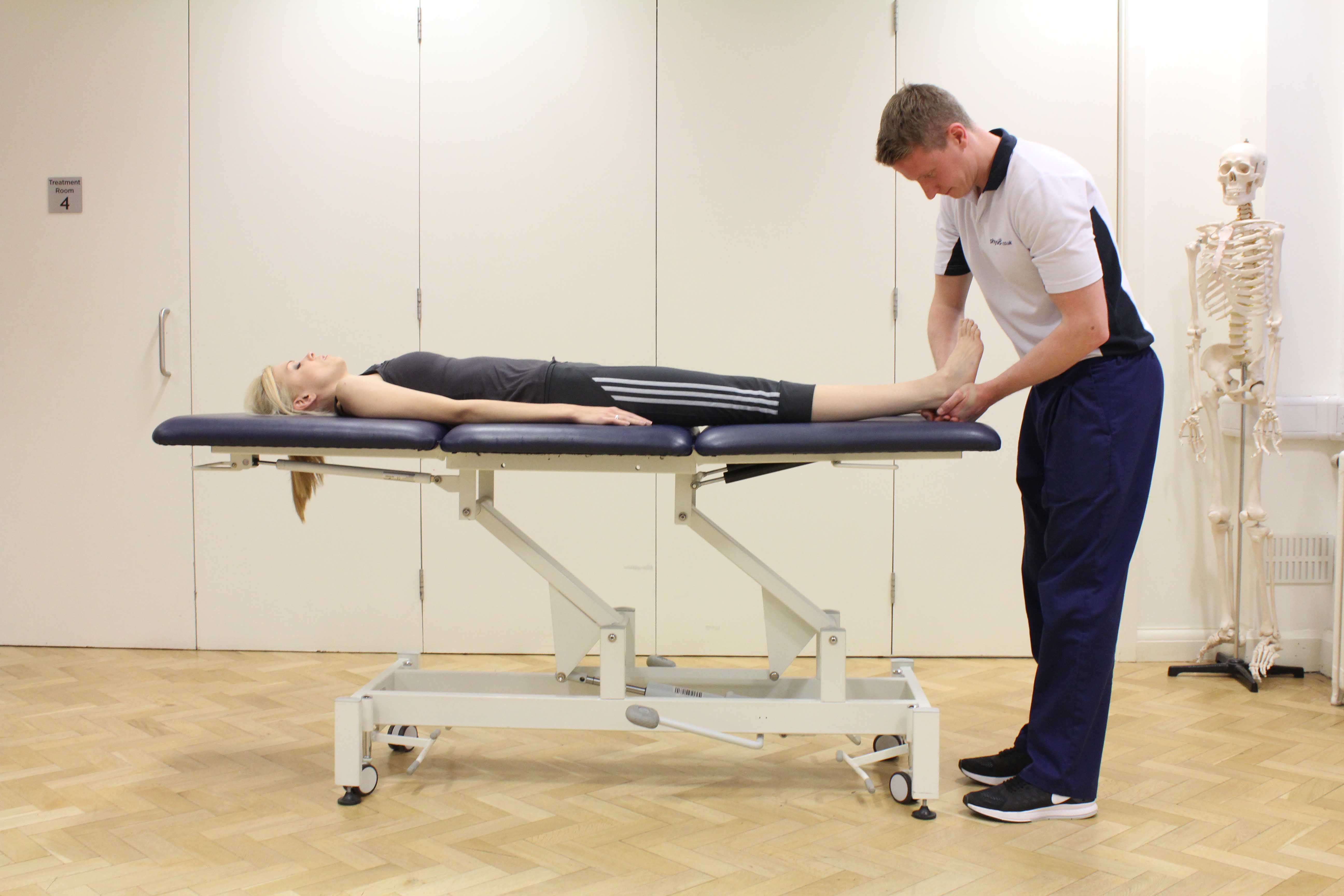 Above: Mobilisations and stretches applied to the connective tissues in the ankle

Initially you will be placed in an aircast boot but will still be able to weight bear. During this stage, your physiotherapists at Physio.co.uk may focus on the following treatments:

Your aircast boot will be removed after three weeks and you will be able to freely weight bear. Your physiotherapy programme will now include:

By now your ligament reconstruction should be healing well and you will be able to feel the effect of your newly stabilised ankle joint. The physiotherapists at Physio.co.uk will continue to progress your previous programme but the focus now will be to include more functional activities depending on your sport, hobbies and job. If you are in a manual and demanding job it will take longer to return to your normal day than a more sedentary job. This will also be the case if you play a contact sport as you will need to be confident that your new graft will not be put under too much stress too soon causing it to become damaged. Physio.co.uk will be able to assess when you are ready to return to your chosen activities.

An ankle ligament reconstruction involves a tightening procedure of a damaged ankle ligament, most commonly the anterior talofibular ligament (ATFL). The surgical procedure is very successful and with the appropriate rehabilitation programme, you will be able to return to your normal independence levels quickly and safely. With a specialised programme devised by the physiotherapists at Physio.co.uk, you will be able to reach you potential as soon as possible. Please call Physio.co.uk on 0330 088 7800 today to book an appointment with one of our experienced physiotherapists.